Well, it’s been an eventful few months since we’ve announced the game and the support and interest has been absolutely outstanding! So first we’ll thank you for all the love!!

On a sad note, the real Fritzy has passed on to doggy heaven. He was roughly 18 years old and had a heck of a good life! We were all very sad with the loss but it was his time and he’ll live on forever in the game with Maddi now! Maddi still has her two hairball black cats, Arthur and Maximo (I didn’t name them!) and they will be making an appearance in the game as a special weapon called out by Fritzy! RIP Fritzy! We miss you!!! <3 <3 <3

I took a break over the holidays, though that just means I only slowed down a tad. We did one last giant update to Insanity’s Blade to try to get the bugs out and I think it’s as close as it will get. The wrapper will fight us forever and we’re just wasting time on it now. We added a lot in though, so if you haven’t checked IB out since November, now’s the time to get at it!

I’ve been super picky about the logo. I wanted it to look like an authentic 1988-1992 Japanese styled logo with a splash of the Irish in there! So after several attempted, I ended up with a very Golden Axe/Altered Beast bit of text. But the English lettering wasn’t sitting right with it. So I came up with a different plan and made a logo that looked much better. This isn’t quite final either. 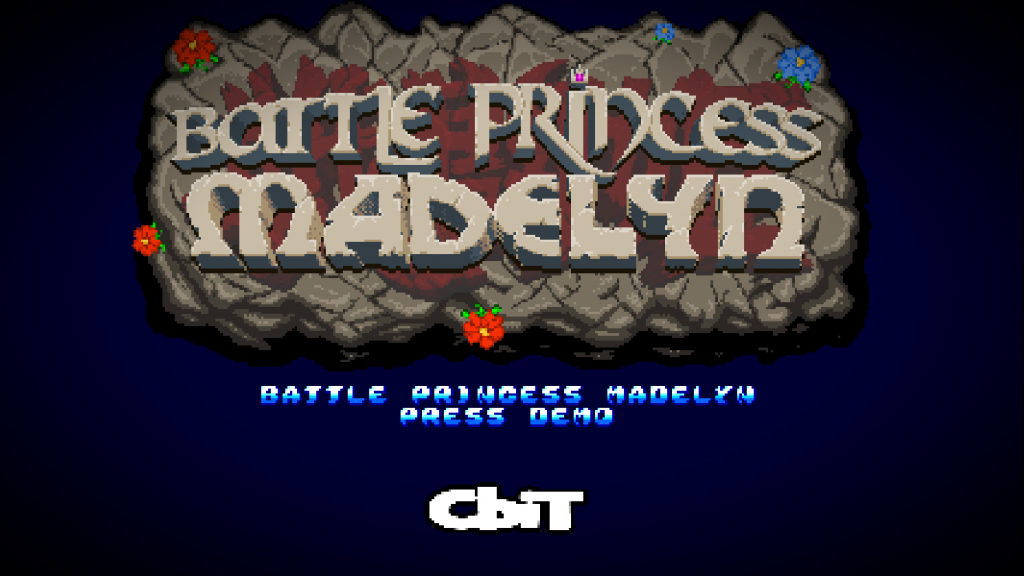 Lighting strikes a stone and carves the letters out. And once the debris has cleared away, flowers start randomly growing around the sides of the text. The Japanese text is now underneath of the English text for the English version of the game. The animation will be different when it is localized for Japan.

New weapons have been added to the current arsenal and the graphics for some have already been updated. All of the weapons for the magic armor are completed. Fire Sword, Cursed Chakram, and a few wands with special powers (Twinkle Fire, Epic Wand of Cheesing and Evil’s Bane that reverses evil and turns enemies into cute woodland creatures). The cats have been made into a special attack that is obtained on the current level I’m designing. I’m not going to give any of that part away though!

For now we’ll call the next part the “Winter Stages”. Since Maddi has been designing the game somewhat, she’s asked for levels that have themes. Some of them are a little too out of the story to really do but we may figure out good plot bits to work them in. For the other stages, it’s mostly just monsters, bosses and locations she’s given me. But the winter levels have been by far her most detailed.

A couple of weeks ago she handed me some drawing and said, “Daddy I did these pictures for the game. I made winter kitties and a haunted house and ghosts.” This isn’t all she did. There was a desert picture with cactus men and bad birds, the haunted house level was more like a big castle with rain and skeletons and ghosts, and the winter level had a picture of a giant cat thing in a cave and food in front of it. So I asked what was going on with the cat.

“This is the snow kitty boss, Daddy.” She said. “You can’t just hit him or he’ll eat you. You have to feed him so he comes out of the cave and you can hit him in the back.” I was pretty dumbfounded by the super description of the picture in front of me. Let alone the whole ***how to beat the boss*** bit. I was shocked she came up with something so clever. She kept telling me she wanted a snow kitty in a winter place so I was just going to make a big saber tooth tiger looking thing in a cave. But from that description I had enough to go on a full Mario style boss fight. She must be either picking stuff up from watching me play games or something in her cartoons? Still – super impressed and it is indeed going in the game!

She went on to tell me she wanted winter cheese heads. Cheese heads are what she calls the things in Ghouls n Ghosts that are called Mud Demons. They are just yellowish piled of mud that turn into pedestals in the 4th stage (I think it’s the 4th). So we can do the pedestals but those things in GNG are like 2 frames of animation and super boring. So I came up with a much more animated abominable snow thing that spits snow balls at you. You have to get close enough to duck and shoot or they pick you off. The other request was “winter zombs”. Zombies – easy.

So the level will begin with people in a small village on a mountain being attacked by things coming out of a cave that was just unsealed by the great wave of magic (happens at the start of the game). We’ll have some villagers spin around and become zombies. I already have children running away from them and into houses. I also couldn’t handle the typical GNG style zombies either. So these ones randomly follow you and attack. And if they can see you from above, they will belly flop on top of you too into a cloud of snow. One more animation I need to add is for when they are on slopes and fall. They will become giant snowballs and roll down the hill until they hit the bottom or a wall and break out and go back to their regular routine.

To do for this stage will be wolves, another style undead, something big before you enter the next stage (not giving this away) and some sort of annoying flying monster. The following stage will be an ice cavern full of giant mammoth bones and other gross bits. This will be the mandatory slip and slide level. I won’t make it too annoying since I often hate these stages the most!

Once the winter stages are complete, I’ll do some video snippets of the game play there! 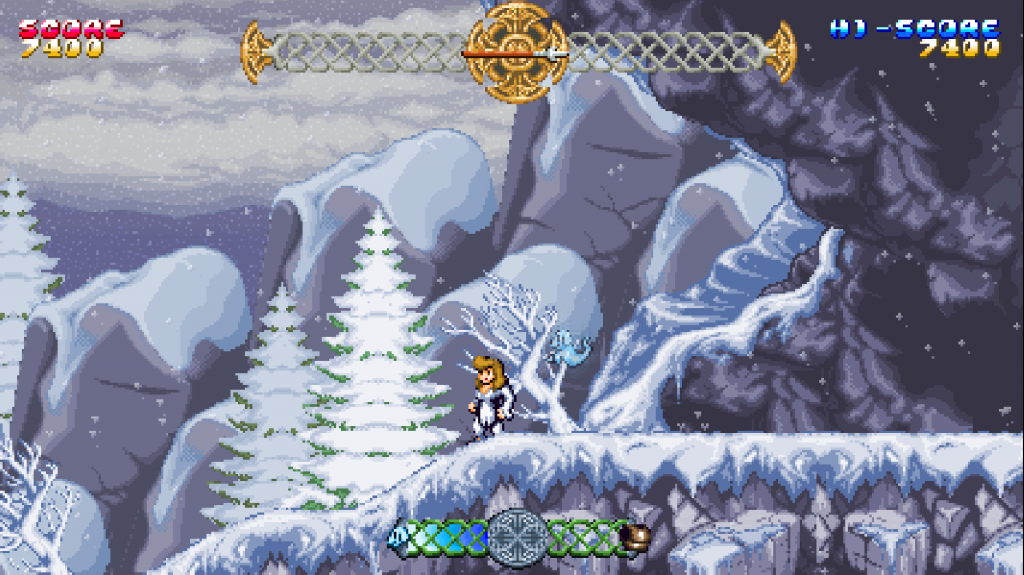 I’ve focused mainly on the map graphics first. The blue platform under the mammoth skull is one which will fall after a few seconds. It’s a bit of a challenge since there are either Winter Zombs or the Abominable Snow Spitters sitting on the platforms. So you’ll have to either be in heavy/magic armor to kill them quickly (powered up dog also clears screens quick) or just time your jumps and duck as soon as you land.

I’ll be posting the pictures Maddi has drawn at some point as well. I’ve had a few people ask to see the pictures already – just don’t expect them to look like what I draw, she’s 5 after all 😉

Cheers and I’ll be back with more exciting news soon!!